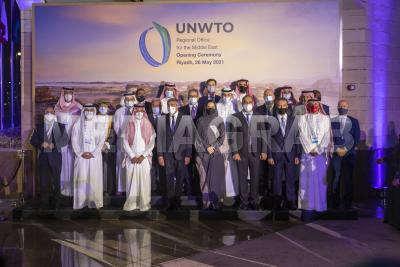 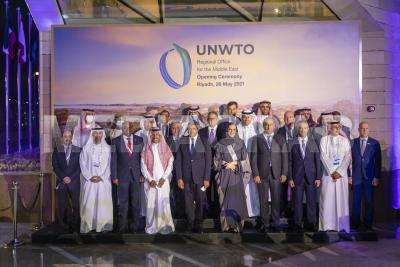 His Excellency Ahmed Al Khateeb, Saudi Arabia’s Minister of Tourism, this week announced that Saudi Arabia has become the first country to pledge financial support to the Tourism Community Initiative by advancing USD 100 million as part of a Memorandum of Understanding (MoU) between the Saudi Ministry of Tourism, the World Bank and the UNWTO to establish a global Multi-Donor Trust Fund. The new fund will support the growth of tourism as a key driver of economic development and will be the first global World Bank fund devoted exclusively to the tourism sector.

The signing of the MoU took place during the official opening in Riyadh of the first UNWTO regional office outside of the Madrid HQ. The new office will serve as a hub for the UNWTO to coordinate policy and initiatives across thirteen countries in the Middle East, acting as a pivotal forum for engagement to drive tourism initiatives in the region and build long-term growth for the sector. The office will lead the UNWTO’s work across the region, promoting tourism products, sustainable development and the collection of tourism data and analysis.

The ‘Best Tourism Villages by UNWTO’ initiative was also announced, a programme by the UNWTO to identify and award villages taking innovative and transformative approaches to the development of tourism in rural areas around the world.

The event was attended by regional tourism ministers and industry leaders, including:

05:00 Andreas Raschmeier, Chairman of the Management Board and CEO, Veridos

“We are, for the first time, thinking positively and thinking beyond the crisis.”

“I think the fact that the industry is an analogue industry and we’ve gone through a pandemic, means that we really have to change our thinking. The biggest problem that we have is that we have an analogue albatross around our neck from history. What the pandemic has done is accelerated all those digital trends. They’ve accelerated a trend in consumer behavior, they’ve accelerated changes in the media. They’ve made enterprises transform digitally at a far more rapid rate. And as to what might happen, I think Saudi Arabia is a really interesting case study. Obviously there have been tremendous objectives laid down. In order to achieve that, Saudi Arabia probably could be the disruptor in the travel industry. “

“The world needs to move on, because we are all tired of being captured by coronavirus and we have to take the initiative to be prepared. However, we also, as a world, need to be sure that we will be prepared to get out of it. I enjoyed the discussions, the opening session and all the different speeches; they were informative. The feeling I get from the discussion is that all the representatives came from their own countries with a mission in their mind: how can they come out from this Summit with a worldwide decision on the next step?”

“I’m very happy to attend this very important meeting in Riyadh, the Tourism Recovery Summit, which is happening for the first time as a presential, hybrid event. It’s giving all of us hope that tourism is coming back. We have more than 100 delegates from 20 different countries worldwide. We have here ministers coming from Americas, from Africa, from Asia, from Europe, to discuss how we can recover tourism, not only in the Middle East region but also in the world.”

5. Andreas Raschmeier, Chairman of the Management Board and CEO, Veridos

“For me what is important going forward is basically establishing the trust, and this comes for me in three topics: the first thing is that we need to address the customers’ need for safety, for security. On the other hand, we need to combine this with convenience and the convenience aspect should never compromise the security aspect. Because we have learned in this pandemic that this is of key importance. And the third aspect is collaboration amongst the world leaders, because we need to make sure that the rules are not just valid for one country or maybe one region, but this is becoming again true for the world. We have seen this with the international standards for what concerns traveling and this must be also, this thing here, that we are developing together the international rules and regulations which gives back the trust and confidence to the individual traveller which at the end of the day will make flourish this business one more time.”

“I would like to congratulate the Ministry of Tourism and His Excellency Ahmed Al Khateeb for having had the initiative to bring this Tourism Recovery Summit together. It truly is impressive to see the tourism ministers from all over the world, as far away as Jamaica, Greece and of course from around the Arab world. This really is a great gathering, a great initiative and shows how serious the kingdom of Saudi Arabia is about developing its incredible tourism following.”

“In addition to this, we have to work together. This is a global problem and the solution has to come globally, therefore we have to coordinate closely – country to country and region to region, and also the government and the private sector.”

Ministry Of Tourism Of Saudi Arabia