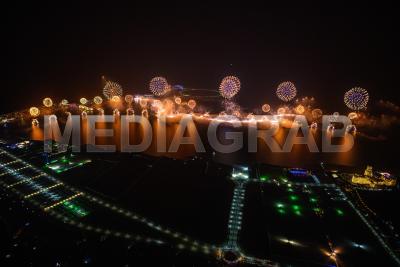 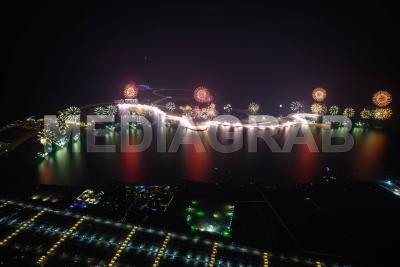 Ras Al Khaimah captivated visitors and viewers from around the world as it ushered in 2020 with a New Year’s Eve fireworks performance that welcomed thousands of visitors to the emirate. This year’s fireworks spanned a duration of 13 minutes and set two GUINNESS WORLD RECORDS™ - one for the ‘Most Unmanned Aerial Vehicles for Launching Fireworks Simultaneously’and the second for the ‘The Longest Fireworks Waterfall’. These take the total number of GUINNESS WORLD RECORDS™ set for fireworks hosted by Ras Al Khaimah to five in just three years.

The first record of the evening was achieved by a firework display using 173 PyroDronesTM, all simultaneously executing a stunning firework display. The PyroDronesTM carried fireworks that could be initiated remotely from the air. The display ushered in the New Year by creating a visual ‘2020’ in the sky followed by an elegant chandelier draped with a beautiful cascade of pyrotechnic sparks ending with the recreation of the monuments of Ras Al Khaimah. The display leveraged advanced pyrotechnics and integrated wireless technology lighting up the shores of the emirate of Ras Al Khaimah.

The second record was for the ‘Longest Fireworks Waterfall’ creating a cascading effect of brilliant white sparks strung across a distance measuring 3,788.86 metres to form a continuous waterfall, breaking the previous record of 3517.23 metres previously held by Fukuoka, Japan. To qualify for the record attempt, each of the waterfall fireworks was required to measure no less than 28 cm long and 3 cm in diameter, with the display required to last at least 30 seconds

The event was verified by an official adjudicator from GUINNESS WORLD RECORDS™ for the ‘Most Unmanned Aerial Vehicles for Launching Fireworks Simultaneously’ and the ‘The Longest Fireworks Waterfall’.

Following the fireworks gala, the organisers received the Guinness World Records titles from the adjudicator.

Crowds thronged the main venue of Al Marjan Island, the lifestyle development by Marjan, the master-developer of Ras Al Khaimah, from early in the evening as well as at viewing decks along the coast at Al Hamra. Marjan worked closely with Ras Al Khaimah’s government entities to set up the public viewing areas across Al Marjan Island. More than 27,000 additional public car parking spaces were provided to welcome the guests.

- Pyro Drones being tested and assembled.

- Fireworks being assembled and rigged prior to New Year’s Eve.

“The record was broken by three thousand seven hundred and eighty eight point eight six metres. It is a new Guinness World Record.”

”The record to break was fifty. You have outdone yourself by achieving a hundred and seventy six drones at the same time launching fireworks. Congratulations. This is the second world record.” 3:05       Vision of Guinness World Record certificates being presented.

3:26       Close up of certificate. ‘The most unmanned aerial vehicle (UAV) launching fireworks simultaneously.

“What an incredible night. Such a spectacular show we had today, at the beginning of 2020 in the Emirate of Ras Al Khaimah two Guinness World Records have been added to the fireworks shows.”