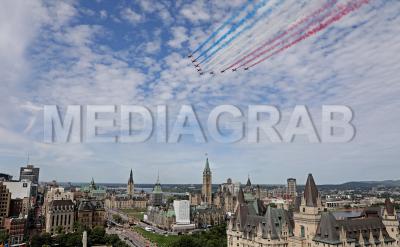 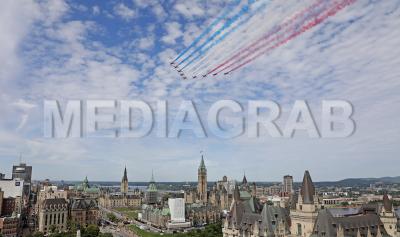 Ottawa, Canada - A colourful flypast over Ottawa’s Parliament Hill was staged by the Red Arrows as part of a tour of North America.

Nine jets from the Royal Air Force Aerobatic Team performed the aerial salute, during a Changing of the Guard ceremony in Canada’s capital city.

The flypast celebrated the links between the United Kingdom and Canada.

Canada has played host to a series of events during the team’s first week of the deployment – including sessions aimed at inspiring young people and highlighting the importance of science, technology, engineering and maths subjects.

Three passes of Ottawa and Parliament Hill were made mid-morning by the team’s aircraft, each featuring the jets in a different formation shape – including the Red Arrows’ trademark Diamond Nine arrangement.

Following the flypast, the jets landed at nearby Gatineau-Ottawa Executive Airport, ready for a full aerobatic display at an airshow there in front of thousands of people later the same day.

2. Video - Ottawa Flypast from the air

4. Photos of the Flypast from the ground and air