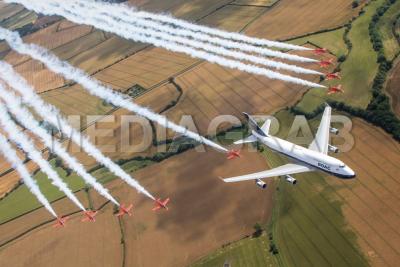 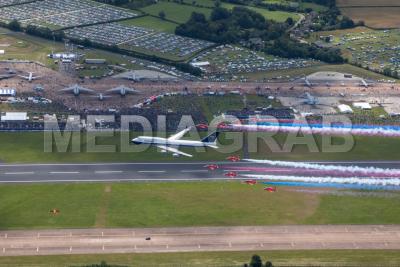 Spectators at the world’s largest military airshow, Royal International Air Tattoo, were delighted at a flypast by a specially decorated British Airways jumbo jet and the Red Arrows.

The special Boeing 747 has been painted in the airline’s predecessor British Overseas Airways Corporation (BOAC) livery to mark British Airways’ centenary this year.

Senior First Officer Tom Perrins was at the controls, while Captain Richard Allen-Williams was in command of the aircraft. They were joined on the flight deck by Captain Simon Scholey and Captain Jonny Lutton.

Also on board was cabin crew member, Julia Lowes, whose brother Flight Lieutenant Dan Lowes is Red 9. Julia, who was in the cabin during the flypast, waved to her older brother who was flying behind.

Captain Allen-Williams said: “We hope the sight of our BOAC liveried Boeing747 provided a wonderfully nostalgic moment for the Air Tattoo audience today. It was a huge honour for us to fly alongside the Red Arrows at RAF Fairford and to do so in our centenary year is even more special.”

The airline has a long history of displaying in the Air Tattoo and first joined the flying programme in 1985 when Concorde and the Red Arrows flew together in a dramatic display. In the early 2000s several British Airways 747s and 777s performed a flypast, and in 2013, the airline performed with the Red Arrows – this time with an Airbus A380 – and to the delight of the large Air Tattoo crowd.

2. Photo Assets of the Flypast