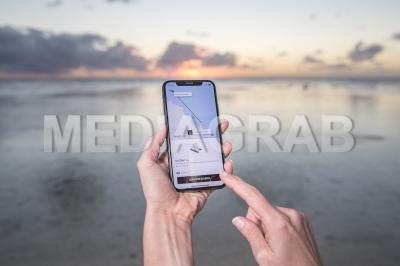 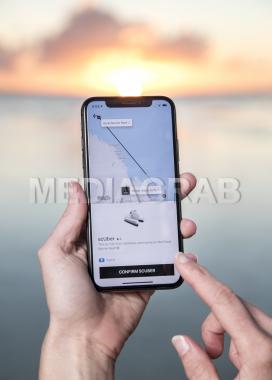 "How excited are we today to have a world first on the world’s largest and most beautiful reef,” said Kate Jones.

But it was Dr David Wachenfeld, Chief Scientist for the Great Barrier Reef Marine Park Authority and the first person to experience scUber, who captured the heart of curious bystanders when he described scUber as a cross between two Hollywood icons.

“We were hovering over the bottom looking down and … you get to see the big stuff and you get to see the little stuff. And, it really is bizarre … like a cross between Nemo and a Bond movie,” Chief Scientist, Great Barrier Reef Marine Park Authority,  Dr David Wachenfield said.

Queensland and Uber have teamed up to deliver this exclusive experience, in a landmark partnership to showcase the reef.

Passengers will get 180-degree views of the underwater icon and taken to depths of up to 30 metres, without even needing a scuba mask.

The rideshare experience will be available at the touch of a button, costing AUD$3000 for two passengers.

“Having this once-in-a-lifetime opportunity to access a submarine typically only available to the ultra-rich is a world changing experience,” said Uber Australia and NZ General Manager, Susan Anderson.

Riders can book the underwater adventure through the Uber app, which kicks off on Heron Island off the coast of Gladstone in Queensland on Monday, 27th May, 2019.

To celebrate the launch of scUber, Queensland and Uber are offering this exceptional bucket-list experience to one lucky winner and a friend from each of the following countries: USA, Canada, United Kingdom, France, New Zealand and Australia.

The unique rideshare service starts on 27th May, and will move to Agincourt Reef, off the coast of Port Douglas in Tropical North Queensland until 18th June.

Heron Island is a small coral cay, based at the southern end of the Great Barrier Reef,  that has captured the hearts of David Attenborough and Jacques Cousteau.

Greater than 69 million football fields in size, the Great Barrier Reef is the world’s largest coral reef with an extraordinary range of habitats and species.  It has more than 600 different types of coral, 1625 species of fish and more than 1000
Islands, making it one of the most complex natural systems on earth.

00:10     Kate Jones, Minister for Innovation, Tourism Industry Development and the Commonwealth Games in the Queensland Government

“Absolutely amazing. It’s a great way to promote the reef and for me personally coming here for the first time to see this wonder. Seeing it from that side, I’ve been snorkelling here and scuba diving and that would be a different dimension of it.

“I think its one way for people that don’t dive, to actually really experience what the coral reef is all about.”

03:34     More scUber experience shots above and below water

“Having this once in a lifetime opportunity to be able to access a submarine typically only available to the ultra-rich, it is something that will give more people the option to have this world changing experience.”

“At $1500 per person, you get a whole day on the Great Barrier Reef, two helicopter trips across the reef, an hour in scUber exploring the Great Barrier Reef up to 30 metres in depth, Uber transfers to and from your hotel. And you feel like James Bond doing something that nobody else in the world can do

When you get in the submarine, it’s just this wide open space. Rather than feeling like you’re swimming through the ocean, you’re really becoming a part of it and that’s when the lightbulb goes off for people who’ve never been under water, or never been in a submarine. They see the connection in the ocean and what’s above it, that’s the best part of my job