The Truth Behind The UAE’s Double Moon Phenomenon 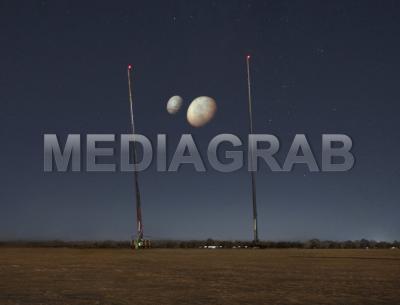 To mark the historic moment that the UAE Hope Probe reaches Mars’ orbit, residents were provided with a glimpse of what it would be like on the Red Planet… With the two moons of Mars appearing mysteriously in the night sky of Dubai.

Story: Hope Probe set to enter orbit of the Red Planet on Tuesday 9th February 15:57 GMT, as UAE marks occasion on Earth with gigantic ‘Double Moon’ spectacle–mirroring Mars’ two moons Phobos and Deimos – being beamed across the night skies in the UAE

- UAE’s Hope Probe tasked with decreasing speeds by 100,000 km/h in order to enter a stable orbit to enter Mars

This great feat – completed on time, on budget, and in a 6-year programme as opposed to a usual 10-year development time – will make the Emirates the fifth player to ever reach Mars*.

But it will not be achieved without overcoming several serious obstacles first. The Mars Orbit Insertion (MOI) manoeuvre will see the orbiter reduce speeds from 121,000 km/h to just 18,000 km/h – while suffering a two-way radio delay from Earth – in order to safely enter orbit.

This 27-minute operation will see the spacecraft consume 50% of its fuel to end-up 1,441 km away from the surface of the planet. From then, until April 2021, the Hope probe will embark on its 20,000 – 43,000 km elliptical science orbit, completing one orbit of the planet every 55 hours.

To celebrate this historic achievement, and the great work of the Mohammad Bin Rashid Space Centre, Dubai has been treated to the spectacle of a “double moon” – replicating what can be seen from the surface of Mars – beamed across the UAE desert skies.

This was done with no explanation, with the two circular ‘rock-like’ objects baffling local residents who happened upon this strange spectacle. Videos went viral online as many took to social media voicing their wonder about the unique objects and whether they were extra-terrestrial. But after some time it was revealed that it was a projection and the Double Moon that could be seen in the night sky – Phobos and Deimos – was modelled on the two moons of Mars and was created to mark the historic moment.

Hope’s mission is focused on atmospheric dynamics – the first to explore the atmosphere of Mars globally while sampling both diurnal and seasonal timescales. It hopes to use these findings to allow us to better understand our own planet, and others in the universe.

It meets the four goals set by UAE’s federal government to send a probe to the planet in time for the Emirate’s 50th anniversary in December, develop the region’s science and technology sector, Emirati scientific capabilities, and increase the Emirate’s contribution to the global science community.

Not only has this achieved these four goals, but it has done so with a 100% Emirati team – 34% female, 80% in the science team – with more than 60,000 young people and teachers engaged in outreach programmes.

Meanwhile, in a further move to celebrate the occasion, every person to pass through immigration and enter the UAE on Tuesday 9th February will have their passport stamped with ink made from Basalt stone – famously found in both the UAE and on Mars itself – gathered and created for this grand occasion.

Khaled AlShehhi, Director in the UAE Government is available for interviews to discuss what this great achievement means for the UAE.

* after the USA, the Soviet Union, China, the European Space Agency, and India.

The following is available for live and pre-recorded down the line or studio interviews:

1. Hope Probe taking off from Japan in July

3. GVs: Two mysterious objects spotted in the night sky of Dubai, UAE (part of the celebration of giving UAE residents the experience of being on Mars)

4. UAE Hope Probe being made

5. Interviews with Khaled AlShehhi, Director in the UAE Government, talking about the Mars mission

6. Interviews with Khaled AlShehhi, Director in the UAE Government, explaining the Double Moon

Other: Additional Information: The Emirates Mars Mission (EMM) and its Hope spacecraft, represent the Emirates’ vision for the future. A post-oil future, where the knowledge and capabilities of those in the Emirates are the wealth of the nation, in addition to, being the source of stability and readiness of tomorrow’s challenges and opportunities. The mission’s ownership lies with the Emirates’ cabinet.

Finally, a recurring theme within the mission is that EMM is not about sending a probe to Mars; but represents a greater hope for the region, that in empowering the youth in the fields of science and technology and having overarching goals; nations today, just like our ancestors, can aspire to reach for the stars, contribute on a global scale and creating impactful policies that will influence generations to come.

The Truth Behind The UAE’s Double Moon Phenomenon

To mark the historic moment that the UAE Hope Probe reaches Mars’ orbit, residents were provided with a glimpse of what it would be like on the Red Planet… With the two moons of Mars appearing mysteriously in the night sky of Dubai.