Tuesday 12th May 2020
View this Asset in Package

Story: The world’s tallest building, the Burj Khalifa, will be transformed tonight into the world’s tallest donation box in a spectacular light show to mark the United Arab Emirates (UAE) smashing its target of fundraising for 1.2 million meals or food parcels for individuals and families affected by the coronavirus outbreak in the country.

Launched as part of the ’10 Million Meals’ campaign, the world’s tallest donation box enabled companies, organisations and members of the public to light up one of the 1.2 million individual lights on the facade of the iconic building in return for a donation.

Starting from the bottom of the 828 metre building, each light will represent 1 meal or food parcel.

As the final donation is made, the last of the 1.2 million lights will be illuminated at the top of the tower triggering a celebratory light show that could be seen for miles across the country.

The Mohammed bin Rashid Al Maktoum Global Initiatives (MBRGI), in collaboration with Burj Khalifa, conceived the idea to support the nation’s ‘10 Million Meals’ campaign to raise donations to provide meals for hard-hit communities by the coronavirus (Covid-19) pandemic across the country.

By tonight the campaign has already smashed its original target and the number of meals donated now stands at 14 million meals which equates to £23.3 million (112 Million AED).

3. GVs - food parcels being packaged for those affected by COVID-19

4. GVs - food parcels being distributed to those affected by COVID-19

Standing tall at 828 metres, the iconic Burj Khalifa is the world’s tallest building known for its unique architectural design.

Inaugurated on January 4, 2010, the Burj Khalifa features 160 habitable levels, the most of any building in the world.

About 26,000 hand-cut glass panels make up its exterior, spanning over an impressive surface area equivalent to the size of about 17 football fields.

The ‘telescopic’ spire, Burj Khalifa’s crowning feature comprising more than 4,000 tonnes of structural steel, can be seen from 95 km away in clear weather.

The Mohammed bin Rashid Al Maktoum Global Initiatives (MBRGI) is a philanthropic organization established in 2015, combining under its umbrella over 30 humanitarian and developmental initiatives and entities, most of which have been launched and supported by His Highness Sheikh Mohammed bin Rashid Al Maktoum, Vice President and Prime Minister of the UAE and Ruler of Dubai, for more than 20 years. 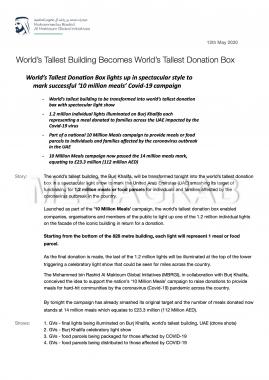 1.2 million individual lights illuminated on Burj Khalifa each representing a meal donated to families across the UAE impacted by the Covid-19 virus